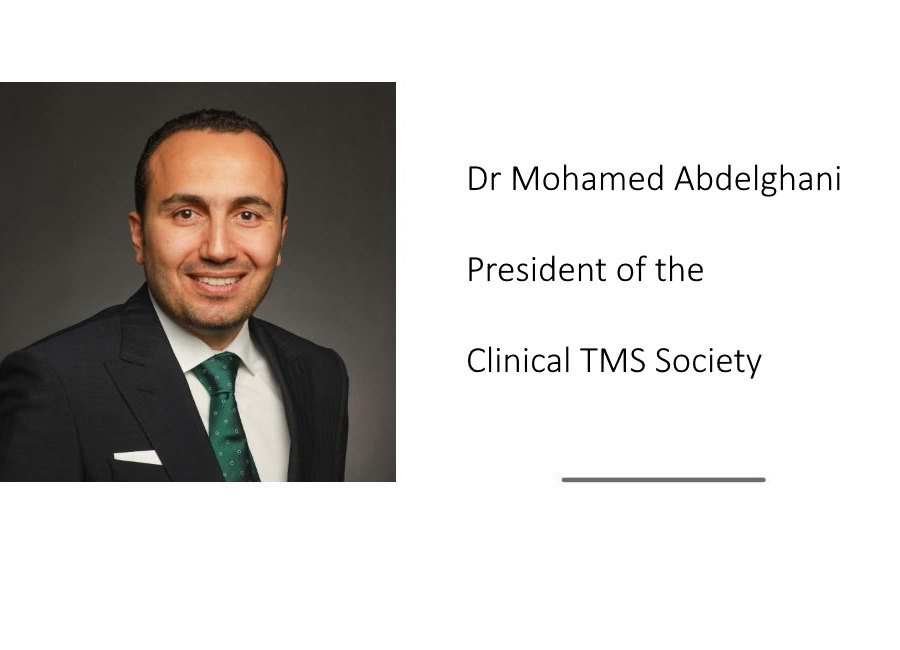 Dr. Mohamed Abdelghani is a prominent fellow and the current president of the Clinical TMS Society. He emigrated from Egypt to the United Kingdom seventeen years ago and has been making great strides in the field of TMS and public health in London ever since.

Although it hasn’t been an easy journey, Dr. Abdelghani believes there is always light at the end of the tunnel. He reflects on his first 6 months in the UK: “When I moved to the UK in 2005…it was difficult to get a job…I applied for more than 130 jobs before getting my first interview!” He moved to the UK with the initial goal of joining the Maudsley Hospital, which is the largest mental health training institution in the UK and part of King’s College London.

“It took me about two years to get to the Maudsley Hospital, and then I [worked] there for eight years…until I became a consultant psychiatrist…[which] is equivalent in the states to an attending physician,” he explains. “During this time, I became really interested in affective disorders, so I worked in a National Affective Disorders Unit in the Bethlehem Hospital, [which is] the oldest mental health hospital in the world, founded in 1247,” Dr. Abdelghani says. The Bethlehem Hospital and the Maudsley Hospital are part of the same Mental Health Trust within the UK’s public health sector, the National Health System.

It was during his time in the Affective Disorders Unit that Dr. Abdelghani began to think about new treatment modalities for treatment resistant depression, and specifically TMS. “Whenever I thought about the tools that we have in our toolbox in terms of medications and psychological therapy…it [became] clear that it doesn’t work for everyone…There was a big gap [where] you jump to ECT and more invasive treatment modalities. I always thought there was something missing—something that needed to be in the middle for people who were not responding to treatment or did not want to take medication or [undergo] ECT,” he explains. This was in 2010, not long after TMS had gained FDA clearance in the United States, and Dr. Abdelghani knew he had to learn more.

This is when Dr. Abdelghani decided to undertake an ambitious venture—to start the first TMS clinic within the NHS in London. At this point, he was working at the Camden and Islington NHS Foundation Trust in Central London as the consultant psychiatrist for the complex depression team. He felt this was the right time and place to open a TMS clinic, but it would take some time.

He began making connections with doctors in the U.S. who were already practicing TMS. This led him to take an intensive TMS training course at the Medical University of South Carolina (MUSC). “I [was] trained by Mark George,” Dr. Abdelghani says. “I spent some time after the course just chatting with different people on his team…I owe all of them a lot because they were very friendly and welcoming [with] their southern hospitality,” Dr. Abdelghani says. He then went on to complete another intensive TMS course at Harvard.

“It [was] not easy,” Dr. Abdelghani says of his time spent on the proposal for a TMS clinic within the NHS in London. “As clinicians, no one teaches us how to build a business case. So, I spent long nights trying to teach myself…with the help of others in the trust working in different departments.” The challenge was to show that a TMS clinic was a good decision both clinically and economically. He learned how to present the plan to leaders of the trust. “The head of the finance department…does not get excited….and motivated by the same thing that will excite and motivate the head of nursing, or the CEO,” he explains. Although it took two years—“If there’s something I learned from doing this business case, it’s that I never call any document the ‘final document’,” he jokes—Dr. Abdelghani feels it made him a better manager who can see things from different angles and analyze risk. His plan was a great success, both at his hospital and others throughout the NHS.

In 2015, Dr. Abdelghani also started a private practice, Dyad Medical. The name is based on the Latin word dyad: “A ‘dyad’ is when two people have a deep philosophical discussion on an equal level with the aim of reaching a common goal…It’s also sometimes used to describe the therapeutic relationship that forms between the therapist and the person receiving therapy,” Dr. Abdelghani explains. He feels it is important for patients to feel empowered to be part of their treatment plan. In 2020, he began offering TMS Service within Dyad Medical, called the London TMS Centre.

He is now looking to expand into the Northwest of England, and with expansion comes increasing staff. “For all our clinicians who join the team, we encourage them to join the [Clinical TMS] Society and to do the PULSES course…because I think it’s different from other courses, and it has got outstanding faculty and they are quite diverse,” Dr. Abdelghani says.

Dr. Abdelghani’s dedication and perseverance in his professional life is mirrored in his personal life as well. He is a certified rescue diver and has been scuba diving since he was 15 years old. “I always think about the similarities between diving and psychiatry,” he explains. “[Both] have a lot of risk that needs to be…mitigated in order to get the job done successfully…communication is key between yourself and your diving buddies, or other members of the mental health team…In diving and psychiatry, you need to have a plan, and at the same time you need to be ready to change the plan.”

As the newest president, Dr. Abdelghani is ready to plan for the future of the Clinical TMS Society. He is both the first person from outside the US to be elected to the board of directors and elected president. His extensive experience with the Clinical TMS Society includes being the co-chair of the outreach committee for two years, and being a member of the educational committee, the membership committee, the budget and finance committee, and a member of the board of directors as well as faculty for the PULSES training course.

“I think the society has achieved tremendous progress over the last 7-8 years…and under [the] leadership…of our [immediate past] president Randy Pardell…we had very ambitious goals and we have almost achieved all of them,” he says. “In my year as president, I would like to give our board of directors the time to stop and think about how we can make the society fit for purpose for the next 10 years.” Dr. Abdelghani is ready to start working toward this on day one, beginning with the Board of Directors meeting this May. “We can take [the society] to the next stage and expand in a more informed way, with a clear vision about who we are and where we would like to be in the next 5 and 10 years.”